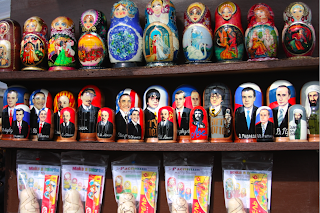 Even though I think there are plenty of special things to see in the city, the latter part of that sentence is definitely true. Every time one of us comes back from the city centre, there’s always a funny story to tell!! “Danny, guess what happened to me today?!”

An example? Yesterday, Nikos and Anna went by the bookstore to return a book that they took by mistake. No books can be returned according to the bookstore’s policy, but for foreigners they can make an exception…

They had to follow one of the employees up the stairs until they got into a small office where they were asked to fill in 3 forms including passport details!! Half an hour later, a reluctant employee would give them the money back!

We’ve also witnessed in astonishment how Russians call the attention of employees when they’re in need of something. They would just yell: Devushkaa!! without any hesitation from the one end of the establishment to the other!! To which once Jeroen actually saw an employee standing up for herself replying “Shtoo!!?” (means: what?!)