One of the great benefits of my Russian course in St. Petersburg must be the fact that we’re living in a true residential area of the city. Not in the city centre, not next to fancy boutiques or restaurants but in a neighbourhood where the average well-off Russian labourer comes home to, buys his dinner, etc.

This allows me, as well as all the other students, to witness first hand how Russians lead their lives in this city, instead of the typical touristic circus in the city centre. During my stay I saw so many amusing peculiarities that I decided to write them down, so here they are:

· In case you want to blend in with the Russians, here are two ground rules: Men -> do not style your hair with any gel or any of that sort. Women -> only wear shoes with at least 8-10 cm heels, the true Russian women even wear it when they go on the beach (yes…I’ve seen it)

· If only by observing the amount of sushi bars located in this city, I think it is realistic to assume that the average Russian must eat sushi at least once a week! Mc Donald’s doesn’t stand a 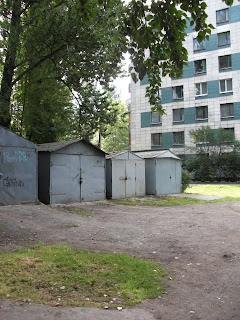 · “The Rock garage”. For years, Russian people have assembled (illegally) their own garage for their vehicles in front of their apartment. Moreover, men would use it as an excuse to escape from their apartment by claiming their car needs some upkeep…while in actual fact, they would invite their buddies for beers and rock music, consequently it has been dubbed the Rock garage!

· When you go with friends to a restaurant and one of you already gets his meal…do not wait until the others get served!! No it is not impolite…the average kitchen here does not understand "having a cosy meal together", instead they send out everything as soon as it is ready. Do not be surprised if you think you order three courses and a side dish, that it suddenly arrives all at the same time! Welcome to Russia!

· If you’re misunderstood by Russians, instead of explaining it in English…try the French or German language. I’ve been told multiple times that more people in St. Petersburg speak these language than English!

· At any local shop, be it at the groceries, the liquor shop or any shop that issues receipts for that matter...Russian employees love to tear your receipt in half before they give it to you! I’ve been told that traditionally there used to be a cashier separate from the department you would buy your products from, so you would pay first and then collect your purchase at the corresponding department. Even though this system has been abolished for a couple of years, the tradition continues… 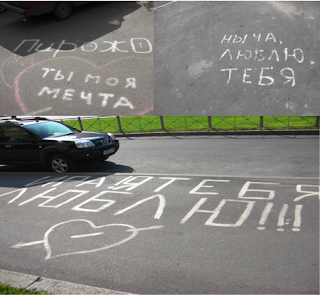 · Instead of declaring your love through a letter, flowers or sending a gift…Russian women really fall for you when you spray graffiti with sweet words on the pavement in front of their building (just in case they forget)!