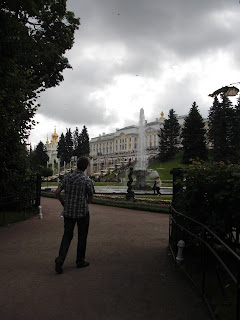 On Sunday we didn't have any plans whatsoever and so we were told to go and visit Peterhof which is like a must-see when you're in St. Petersburg.
We woke up nice and early and instead of taking the metro we decided to take a shuttle-boat which was slightly more expensive but is worth it for the views!
Peterhof was constructed slightly after the Peter & Paul fortress and was
sort of like a triumphal palace which Peter the Great also ordered to construct and consists out of a lot
of fountains, garden villa's, statues, bathing houses...you know, what you normally expect when you go to a summer house! I can only imagine how he would have addressed his
architects..."How would you like the fountain to be designed, your Majesty?" - "Achh...just make it big and be sure to use all the gold you need!!" Ironically enough, one of the main fountains was
nowhere to be found after the second world war and was eventually tracked down in Germany! Below you'll can see some of the pictures I took 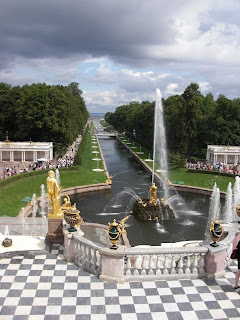 The main fountain called "The Mezheumny Fountain" which means...a bit of this, a bit of that! 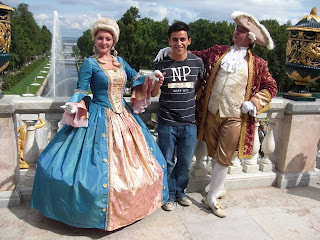 me mingling a bit with some russians 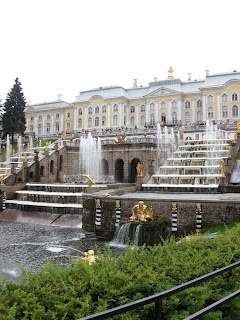 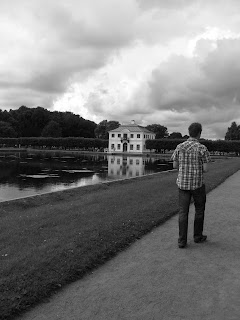 This little villa (shown in picture above) is where Peter the Great would invite his guests to go fishing, of course that activity requires a house for itself. 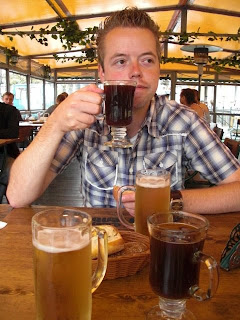 After having strolled around for a couple of hours we headed back to St. Petersburg and went to a restaurant where we all had our first try of the local russian drink Kbac. A drink which is fermented from rye bread...not incredibly appealing once you hear what it is made of but actually tastes not too bad!!
Posted by Danny at 8:02 AM