Our stay in Moscow had been short and am sure that we missed some places of interest but what made my stay memorable was definitely spending the night at Dimitri. Dimitri is a friend of Nastiya (my practical teacher) who said we would be more than welcome to spend the night at his place and set a time and place to meet up.

After a little while of lingering around our meeting place he came waiving at us and we set foot for his place. He lives a bit on the outskirts of Moscow (like 30 minutes from the city center) where the suburbs didn’t look much different from the ones in St. Petersburg. As we arrived at his place we were greeted by his girlfriend Julia and without further ado Dimitry left and we wondered around the apartment for a bit. The apartment had an amazing view of the city with buildings stretching out as far as we could see (according to the latest census, Moscow has over 10,5 million inhabitants!!). 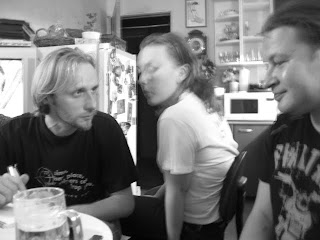 Julia was so kind to prepare a meal for us and we sat together at the kitchen table whilst properly introducing ourselves. I quickly fetched my little Russian-English dictionary, as we were bombed with new words! After our meal, the table was filled with home-made zakuski from their dachas and other friends started joining the kitchen table. Quickly me and Jeroen also got our notebooks out as they were teaching us slang!! The evening was filled with laughter and after a couple beers they started playing songs of Viktor Tsoii on their guitar (apparently a Russian ‘revolutionary’ rock star). 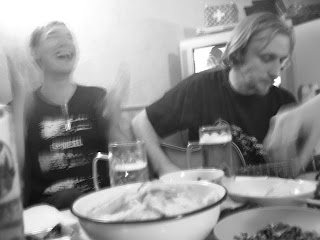 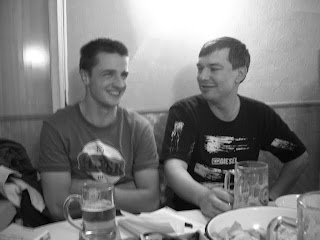 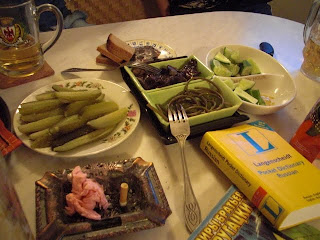 They loved that we did our best in explaining ourselves in their language and they would answer all the questions we would have, though the dominating answer must have been ‘because’! Whatever may seem odd to us, appeared even illogical to Russians and so they would just shrug their shoulders and say yeah…that’s just the way it is!

It was a great evening and I don’t think I’ve ever experienced such hospitality…the morning after they all wanted to go with us and show the city center (the strangest thing one of the guys told me must have been…’I only go to the city center like once a year!!!’ and his friends would call him to meet up, but when mentioning his location they would all be asking why?!??!)

We both told them we wanted to see the Lenin mausoleum after hearing rumours that that they’re planning on removing it within a month. We stood in line for about 45 minutes and gave all our bags to Dimi, whom already saw it 8 times, and were screened for everything. No phones, no bags, no cameras…no nothing, nothing was allowed as we went in and when you’re in you’re not allowed to stand still! Honestly, I was soooo nervous when entering the mausoleum as cold-blooded soldiers were standing on each corner! After several dark hallways we arrived at the center of the building where Lenin was located, soundless we walked around his tomb with strict soldiers observing our every move…the air felt strange somehow and watching him lying there felt like witnessing history!

Afterwards we walked around the city and as time flew by we had to say our good-bye’s at the train station...till this day I think it is incredible the way we somehow connected and became such friends, hugging eachother at the station and promising to write eachother frequently!! Moreover…as the train was leaving the station, one of the guy

s followed whilst waiving! Priceless memory and I hope to see them again soon! 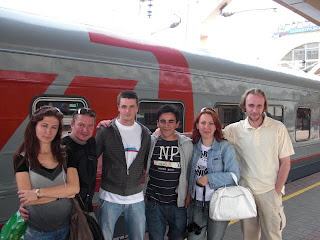 I think I can now speak with more certainty that even though Russians may look mean at first, deep down they are softies that love to see you smile!!