As we walked outside of the station it felt as if we witnessed the start up of a giant market place filled already with people rushing through as well as drunken ones randomly standing on corners, lots of cars and small food stands. The weather wasn’t really in our favour and it would rain from time to time for about 10 minutes that day.


We strolled around the Kremlin in the beginning and then consulted our little guide for other things we could see.

First off we went to see the tretyakovskaya gallery which is located in what seems to be a church from the outside (slightly embarrassing as I asked a local souvenir shop opposite the museum where I could find it! She laughed and made me turn around –bot!) 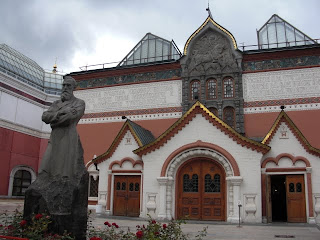 The gallery is immense and houses one of the finest paintings of Russian artists, unfortunately we were under time-pressure and couldn’t see everything at a slow pace but I personally am starting to become admirer of Ayvazovskiy and his way of painting nature. It is truly beautiful!

Afterwards we went to the Pushkin museum, here he lived for a couple of years and it holds a big collection of original works and his personal possessions. It was very interesting although unfortunately not many things were described in English but it was definitely worth a visit!

Close by is also the Tolstoy museum which we visited. The museum really explains the different facets of his life, influences and correspondence letters he held with many (famous) people from around the world. It also showed the special relationship he had with Ilya Repin who painted him and his family numerous times of which a couple were on display, something that I didn’t know.

After our little culture overdose, we sat down in a park nearby wondering what we could do next…to our surprise we actually found this difficult but eventually decided to go to a park called VDNH which was formerly used to exhibit the achievements of the national economy. Our first impressions were of excitement as we saw the monument of Russian’s space endeavour during the period of the cold war, but against my expectations it soon declined from there.

It is a tremendous park which takes you at least 2 hours to walk through with immense soviet buildings and landmarks decorated with communist emblems which nowadays have lost its purpose and without a specific direction they’ve let the market run its course. Restaurants, commercial shops, supermarkets, 3D theatre, ferris wheels and even a track for kart racing now function next/in these buildings along with statues of the hard working comrades during the communist era and Lenin. A typical little tourist train drives jauntily through the boulevards and American music can be heard through the loudspeakers spread out through the park. It was a strange sight, which we quickly decided to leave in order to meet Dimitri or Demi or Mitya (Russian names always appear to have like 3 different names for some 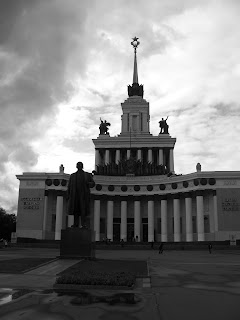 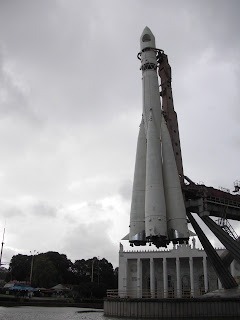